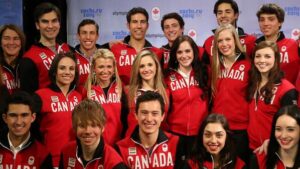 The Canadian Olympic Committee announced the 17 skaters who will represent Canada at the 2014 Winter Olympics at a special ceremony in Ottawa, one of which is our very own Winter Club of St. Catharines coach: Kirsten Moore-Towers!

The skaters were named one by one, and invited to receive their official Canadian Olympic Team sweatshirt.

The team represents some of the best skaters in the world. Chan is a three-time and reigning world champion, while Virtue and Moir are two-time world champions and defending Olympic gold medallists. Weaver and Poje finished fifth at the Grand Prix Final in January, while Duhamel and Radford, and Moore-Towers and Moscovitch finished fifth and sixth, respectively, in pairs.