Kirsten Moore-Towers and Michael Marinaro, both born in 1992, teamed up in the spring of 2014 after having been in long-standing and very successful partnerships with other skaters, earning World, International and Olympic medals. 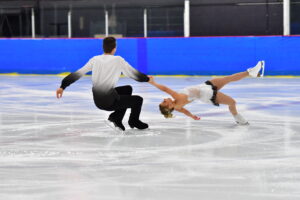 Michael was born, in Sarnia, where he spent the first 12 years of his career with the Point Edward Skating Club. Kirsten was born in St. Catharines, Ontario and skated with the Winter Club for 11 years. Kirsten and Michael made huge sacrifices along the way to advance their skating careers, including leaving home at young ages to train at facilities elsewhere in Ontario.
This team’s strong work ethic, natural athletic talent a 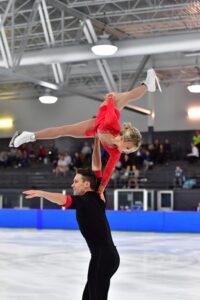 long with their respect and commitment to each other helped them to earn a spot on Canada’s National Team each year since teaming up. In March 2015 Kirsten and Michael made the decision to relocate to Montreal, Quebec to train under the direction of world class coaches, Bruno Marcotte and Richard Gauthier and alongside world class athletes. The decision to do so proved to be a wise one when in their second season together they earned their first Grand Prix Medal together, a bronze, at Skate Canada International and a trip to the World Figure Skating Championships where they placed 8th. Kirsten and Michael missed the entire Grand Prix Season in 2016 due to injury and were very excited to compete at the 2017 Canadian Tire Skate Canada National Championships where they placed 3rd, earning their first national medal. Recently they competed at the ISU Four Continents Figure Skating Championships in Gangneung, Republic of Korea, a test event of the 2018 Olympic venue. They hope to return next year to compete for Canada at the 2018 Olympic Winter Games.